This is an original collage created in 1993 by Helga Hedgewalker (from source photos by Russell Lane), depicting Anat, the Ugaritic/Canaanite warrior goddess (or “Tomboy of the Gods” as she is also called in this modern revision) confronting Mavet, or Mot, the God of Death in his realm. Author and scholar Steven Posch created (in the 1990s) a modern retelling of the story in which Anat recovers the Sun, the Moon, and Fire from the clutches of Death.

Ancient versions of this story focus on the bloody thoroughness with which the warrior goddess dispatches her enemy; in Posch’s retelling, some of her later affinity with Astarte and other goddess of love (as well as war) was revealed. Thus this confrontation was not quite so bloody, but Anat still got what she came for, and Mavet got a little something unexpected as well….

Anat was played by Carla J., and Mavet by me. 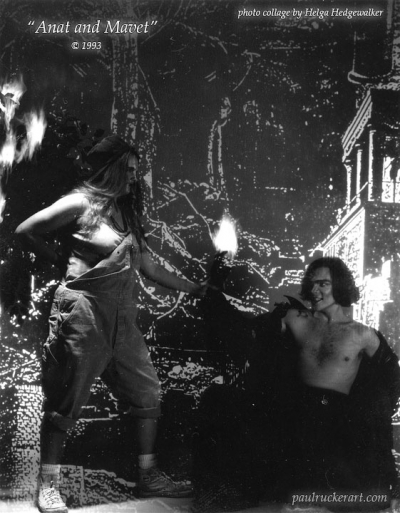